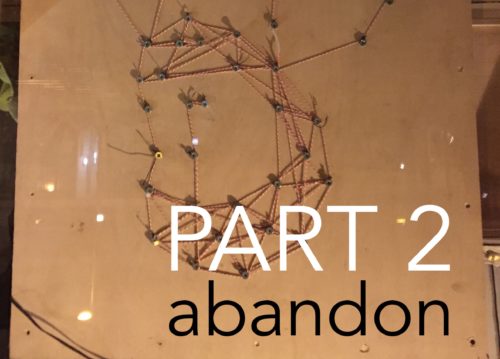 I asked for this.

I forgot I did, but I asked for the predicament I’m in. To remember that is the first step to realizing it is God’s mercy, not his judgment, that’s brought Christendom™ to its rightful place on the verge of irrelevance.

I use the word Christendom™, trademark symbol included, because it’s a safe, accurate word for what I’m trying to describe.

Christianity and Christendom ™ are not the same thing. I use Christendom™ to describe the amalgamation of strange interpretations and actions misunderstood and mistaken in attempt to live out one’s Christian faith.

Christendom™ is the well-intentioned energy spent on cutting off the ears of every poor bastard since Malchus.

It’s the soil surrounding the roots of those who’ll censor themselves from using cuss words in public while subtly uttering the-n-word in sans-African-American settings. You know who you are 😉

Disciples of Christendom™ trash mainstream media and music for fear that Jesus’ allure is as sensitive as their own ego.

It’s the spirit of monopolizing God to ensure no one falls in love with Jesus deeply enough to see him glorified in a setting/manner other than what’s been thoroughly investigated and deemed safe far in advance.

I could go on, but I’ll sum it up like this: When the leaders of the Christendom™ of Jesus’ day encountered Jesus, they had him killed. And if you’re paying attention to the statistics of people my age who’ve abandoned the God they grew up with, Christendom™ is still wreaking havoc on the heart of God.

But back to where I started: I asked for this.

I asked God for whatever it was he wanted for my life when I was 13.

12 years later, I’ve yet to feel at home with any group or in any setting. I either don’t know whose team I’m on or I’m embarrassed by those who claim to be on my team.

Non-Christians are baffled by my life choices while Christians suggest I could be fixed if only I’d join their small group.

Millennials mock me while Baby Boomers tap my knee and wink while offering a condescending, “You’re young. You’ll learn.”

And finally, Christendom™ has humiliated me while Jesus keeps chasing me into those settings/manners that were deemed inappropriate for younger Arvins.

I’m not complaining because I have no one to blame but myself. I asked for this. I wanted to become Arvin, and the price thereof has been everything I thought I had to offer the church and the world in the first place.

I’m saying this because the people who tell me they read my blogs tend to also share their own perplexing, eyebrow-raising experiences of Christendom™ that’ve left them wondering how Jesus can be who he says he is when the people who claim him are never who they say they are.

It’s complicated and vexing. It’s disturbing and nuanced. But most of all, it is merciful and necessary.

Weren’t we the young people who came of age being told God has a plan for us? Didn’t we run to the altars of those churches and stadiums where we knew we’d seen and heard something real? Why else have you been waking up to read your Bible and pray, trying to hear God’s voice, and hoping you’re not wrong when you act on what you heard?

You asked for this.

Every worthwhile, fruit-bearing move of God (read your Bible, read history) demands this pruning period that’s far more than we bargained for.

And since you asked for this:

I humbly submit that you abandon Christendom™ and cling to Jesus—because his romancing has never appeared as alluring as it’s about to appear in the next couple decades. As the pillars of society leap closer to falling over and screaming, “Uncle!”, it’ll be you, the ones who abandoned Christendom™ for the sake of knowing God, who’ll be tasked with teaching them the word they mean to exclaim is not “Uncle!” but “Father.”