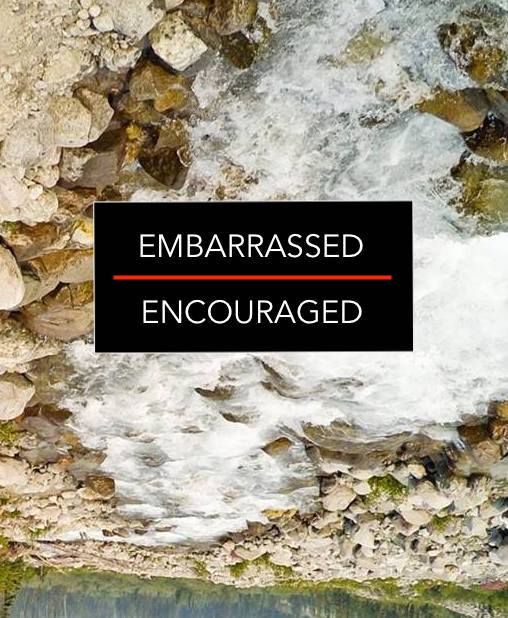 I’ve come here for spring break with dozens of other students to prepare for the summer. Each of us is a leader taking teams on mission trips all over the world this May.

To prepare, we’re divided into teams and assigned projects to accomplish throughout that week. Each day, a different team member will lead the team. The rest of us will provide feedback.

I embarrass myself several times during this week.

On the day I’m to lead the team, I decide to take everyone to Starbucks so we can bond, journal, and read. I GPS us to the only Starbucks close enough for our time constraints.

Embarrassment #1: The Starbucks Arvin picks is in a grocery store. The seats are wooden and janky. The loud refrigerators full of milk and eggs are closer to the sitting area than the “baristas” and their malfunctioning cash register.

Obviously, the team takes it in stride. One young man has even opened up his Bible and is journalling vigorously. I’m baffled he’s found himself capable of focusing when shoppers’ screechy carts keep bumping into the back of his chair.

I peek over his shoulder to try and see what he’s journaling. I can’t read his handwriting without staring intently at it. I wonder, Could God be talking to him in this grocery store?

I can’t tell, but his Bible is open, his eyes are focused, and his pencil is moving quickly.

Encouragement #1: In spite of my mistake, one young man on my team made the most of our time.

How it came to happen, I’m not sure. But one evening, our entire group is at a Nepalese restaurant. They happen to have an aux cord and a stage area. After everyone has eaten, someone starts playing music.

Remarks are made about the exercise I do in my car when I’m alone and need to decompress—freestyle rapping.

I enjoy this activity because I’m often too analytical and coin my phrases far too carefully. But when a beat is on and you have to hit a mark, you can’t afford to censor yourself. I often find out what I really think about something by rapping about it.

It’s never as good in public as it is when I’m alone. Regardless, I end up on stage. A beat is playing. And people are cheering me on as I rap about traveling around the world.

Embarrassment #2: For the sake of the rhyme, Arvin raps insensitive and inappropriate lyrics in front of 3 dozen missionaries and various other random guests.

Nevertheless, we moved on.

The mission our team has this week involves an after-school program in an area full of refugees. Our team leader that day led the charge of mentoring kids in reading and math.

He came up with games that entertained and informed them. He tutored them. He made them laugh. He looked beyond their situation and spoke to them as though he already loved them.

I was particularly cynical about Christian leadership at that point. I was intimidated by that day’s team leader, not because he came off as impressive or a big deal, but because my skepticism and sarcasm didn’t hold up anything against his integrity and character—I’d walk away from a conversation with him convinced he thought I was impressive. He treated others like they were the big deal.

That day’s team leader was the same young man who’d journaled in that grocery store.

Encouragement #2: There are honest, passionate Christian leaders. You can tell who they are by how well they initiate you into your own role as a leader. I reread my journal from March of 2014 and remember that to be the week the bonds of cynicism were broken off my life.

Crying in front of strangers is not ideal. At the end of that day, we sat in our white 15-passenger van as a team and gave him feedback.

He sat in the front passenger seat. I was in the back. One by one, we talked about how well he’d prepared for our time with the kids, how no moment fell idle and no child felt unloved. As the conversation moved toward the back row, the topic went from feedback on the day to what we’d imagine him doing in the days that were to come.

Embarrassment #3: Arvin is so deeply moved, both by the integrity he’s observed and the insecurity he’s been given permission to let go, he cries as he tells John Chau about the severe anointing on his life.

Hall of Faith. It’s the term given to Hebrews 11, where those whose great faith is praised.

v 32-33  “How much more do I need to say? …by faith, these people overthrew kingdoms, ruled with justice, and received what God had promised them.”

But there’s a second part to that chapter. It’s one we hardly ever hear about because, well…look:

v 34-39 “But others were tortured, placing their hope in a better life after the resurrection. They were jeered at, cut open, sawed in half, killed with the sword…they were too good for this world.”

Encouragement #3: Could God be talking to him in this grocery store? As the world has found out over the last several weeks, the answer to that question is yes. He was talking to him long before that, and he still is.

And why was I crying?

I didn’t know at the time. I couldn’t read his handwriting that day in that “Starbucks.”

But this past week, I finally stared at his handwriting intently enough.

“Watching the sunset and it’s beautiful — crying a bit…wondering if it’ll be the last sunset I see before being in the Place Where The Sun NEVER Sets. Tearing up a little.”

“My life is in your hands, O Father, so into your hands I commit my spirit.”

“I miss…someone I can talk to and be understood.”

And now you have that, John. The One who reserves the right to understand his children has perhaps already told you what none of us may know in our lifetime: “WHO WILL TAKE MY PLACE if I die?”

Now I know why I was crying back then, John. My tears weren’t of sorrow or fear, but of reverence.

Embarrassment #4: I’m embarrassed by how nonchalantly I’ve claimed to love the same Jesus this man loves.

Ultimately, I am left with the memory of our last conversation.

Summer came and it was the morning our teams were to leave for South Africa (John) and Burkina Faso (me).

We sat on a couple benches during that time in the morning when the Oklahoma summer heat has hit the snooze button a couple times. We talked about what was coming up next.

We laughed about a young lady who didn’t want to date me because she wanted a man like him. I teased him about ruining it for the rest of us.

But John, you really have ruined us for anything else. After watching you, how can any of us not be embarrassed and encouraged as we examine the lives we’re left to live?

I read the things people say about you and don’t feel anything. I know how you’d handle cynics because you loved me out of my cynicism.

I know how you stayed out of meaningless arguments because you were ruined for anything but what mattered—God’s love for all people.

I know you made the most of your time, whether it was in a grocery store in Atlanta or an island off the coast of India.

You really were “too good for this world.”

“I think I might die — tomorrow even…I pray that you will never love anything in this world more than you love Christ. Stay strong, keep the good faith, and may your life be continually filled with His grace and peace and might. I’ll see you again…and remember, the first one to heaven, wins.”

You won, John. See you soon.

Older
Free to Get Hurt
Newer
You Can't Predict Hindsight